A downloadable game for Windows

Meteor launching team building arcade action!
Clear the roads and defend the citizens of a magical torus for as long as you can.

Created in 48 hours for Ludum Dare 47. DocJekyll and I decided to team up this time around, though we only had 48 hours to do the work. We are submitting this to the Jam but used the Compo time constraints, please take note of our courage and valor.

The idea was riffing off of Missile Command, an arcade classic. Enemies approach, you fire shots with a travel time and a lasting damage zone, trying to scoop up as many targets as you can in one hit. Things get hectic before too long, with your team filling up with pirates, archers, and axemens, all trying to clear out an array of ever more mobile and clever enemies.

Letting enemies pass you will eventually bring you defeat. Waves are trips between towns, and if you begin a wave having let too many enemies pass you in the wave prior, you are in a sudden death mode where only a handful of misses can end the game. If you make it through, some of the pressure is off, so keep at it.

Sometimes your hired allies will ask to leave the party and go on a quest. If you manage to make it through a whole loop and return to where you left them, they'll rejoin you with vastly improved power. Or, you could just sacrifice one of them at the blood altar in case you're doing really poorly and need to take some heat off.

Every note of music was from Doc's laboratory. He actually wrote ten layered tracks that blend in and out as the party size changes, towns are visited, and the danger level increases.

Some of the art is derived from Oryx's excellent Tiny Fantasy set. Very little was used as-is: we animated, modified, and built all new content out of the base. However, Oryx's work was absolutely a springboard for us and so we've recused ourselves from the Graphics category. 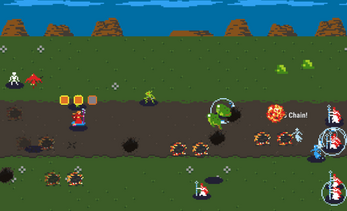 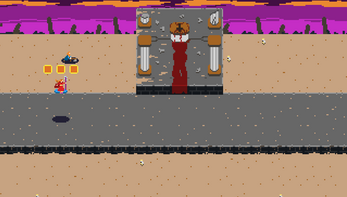 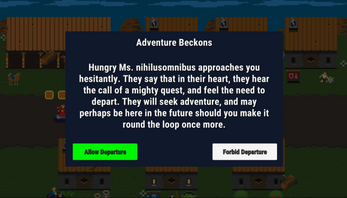